It was shortly after Lance Brown left CTV Sports in January 2018 after a 33-year career in broadcasting that he made a decision to relocate to some place quieter and eventually settling on Port Perry, Ont.

He recalls that it was fellow broad-caster and good friend Ken Shaw suggested to him to give it a look.

It might have been a little further afield than Brown would have wanted but after touring the area and stumbling on a renovated schoolhouse that would eventually become his home, he felt why not give Port Perry a try. Safe to say, there is no looking back.

One thing led to another, and last November, he ran successfully for town councillor in Port Perry. That warm, small town feeling he says, really hit home while canvassing before his election.

Not a single person complained nor would they change a thing, says Brown. People who live in Port Perry are happy: “They say hello, you say hello, everybody knows each other — in a good way.”

Earlier this month, Brown and other local dignitaries were on hand for the ribbon cutting ceremony for the Courts of Canterbury, an adult, active lifestyle community built by Geranium Homes.

The first phase calls for 33 new homes, and a second phase with 66 homes will be added to an existing neighbourhood that was built on the site of

a former golf course and has become one of the area’s most sought-after addresses.

Great lengths are being taken to make sure the new homes fit into the existing neighbourhood in terms of the home’s styling, architecture and the streetscapes, says Stephanie Lane, director of sales and marketing for Geranium.

Two model units are available for viewing — The Canterbury and the Chesterman — and 14 different designs are available. Additionally, the site is only just steps away from Lake Scugog.

In an interview, Mayor of Scugog Township Drew Brown emphasized that there is such limited opportu-nity for growth in Port Perry, so it becomes that much more important for new home sites to fit in.

She says Port Perry can only grow so much given that it and surround-ing Township of Scugog area is “95 per cent covered by greenbelt and the Oak Ridges Moraine.”

“Once we build the (planned for) 1,000 units, we will be pretty built out,” adding that could all happen within the next five to 10 years.

“We don’t have any white belt area for development so we are really restricted on how many new home sites can be added,” says Drew.

A long-time resident of Port Perry herself, Mayor Drew originally came from Scarborough and was immediately attracted to the area: “The mature trees and lake, the local coffee shop and bakery – I thought this was it.”

There is also no shortage of local activities from a Farmers’ Market, to its Beerfest and ‘Veterans in Corvettes’ events, to dragon boat races, house tours, plus a growing arts and live theatre scene.

Key to Port Perry is the heritage feeling, the entire downtown had to be rebuilt in the late 1800s because of two major fires which led to the creation of an all-brick Victorian style.

“We recognized many years ago, that this is a heritage district, so there are many rules to do with the outside of the buildings to keep that look — from signage, to window treatment, to colours — it all has to meet a certain standard,” says Drew.

That idyllic setting has put Port Perry on the map, both as a tourist destination with its clothing stores, restaurants, cafes, and B&Bs; and, as a hub for TV and movie production.

The town often doubles in films and TV series for a small town you might find in New England and is a location for Hallmark movies.

As for the future, working on the waterfront is the priority, says Drew. The town has gathered a lot of community input and is looking at new designs for the municipal land it owns along the shores of Lake Scugog.

A boardwalk already exists, and future plans include dredging parts of the lake, filtering water, creating a wet-land and building a berm.

The town is also actively seeking to recruit investors to help restore its local mill, the oldest in Canada.

In addition to the Courts of Canterbury, the town is planning to add to the housing mix including low-rise condos and retirement living.

And while looking forward to the energy that the new growth can bring, Drew says although “we are approaching a mini-boom, we want to keep that small community feeling.” 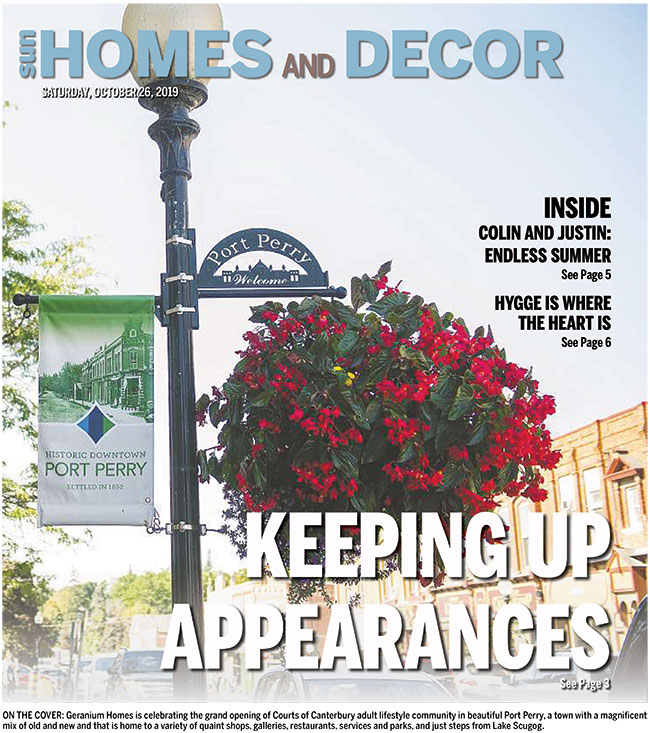