New home construction in the Toronto region fell short of provincial targets by almost 100,000 units between 2006 and 2018, spurring higher prices and costing governments over $IO-billion in missed taxes and fees, a new study has found.

A review of housing construction by data company Altus Group shows a shortfall in new construction in 11 of the past 12 years, with only 2015 exceeding targets in home building. The review compared the completed supply of new homes to the annual growth targets laid out for municipalities in the Ontario government’s Growth Plan, which was adopted in 2005 to govern development of the sprawling Toronto region.

The 12-year shortfall in construction compared to the annual targets equals 98,900 missing housing units across the Greater Toronto Area and the South Simcoe region, which stretches north of the GT A up to Barrie, the study said. The report was prepared for the Building Industry and Land Development Association (BILD), the industry association for GTA home builders.

BILD chief executive officer Dave Wilkes said the data offer a conservative look at the inadequate growth in housing supply in the region because the Growth Plan targets underestimated the total population growth that later emerged in the region. In the City of Toronto alone, he said population growth exceeded 2005 estimates by more than 96,000 people.

Mr. Wilkes said the GT A housing market is “fundamentally out of balance” because demand has far exceeded supply, which tightened market conditions in the region and made homes increasingly unaffordable for many buyers.

BILD said another major impact of the lack of construction activity is a loss of revenue for all levels of government. Municipalities impose development charges on every unit of new housing that is built, and would have earned an estimated $5.15-billion in additional development charges over the past 12 years if construction targets had been met, the study estimates.

Adding additional education development charges, property tax revenues and the HST that would have been charged on new-construction homes, the report estimates all levels of government would have reaped $10.1-billion in revenue if the targets had been met.

Altus Group said if the construction shortfall continues over the coming decade at the same pace as the past five years, there will be an annual average construction shortfall of 4,400 units between 2019 and 2029, which would translate into a further $13-billion in missed government revenue from municipal development charges and tax revenue.

Mr. Wilkes said the population of the GT A is expected to grow by 40 per cent to 9. 7 million people by 2041, so housing will tighten further if supply problems aren’t addressed. “It really is a generational issue,” he said.

BILD is launching a new public campaign to answer common questions about how the development industry works and how projects get approved, hoping to create greater public support for new construction and new development policies.

Developer Stephen Diamond of Diamond Corp. said property developers often face difficulty getting larger projects approved by local councillors, who don’t want to antagonize local residents who oppose changes in their neighbourhood. He said that leaves developers as the only voice arguing for new construction on behalf of future residents.

“If there’s not a proper balance in the political system with respect to these opposing forces, then the supply of housing wiJl not be met,” he said.

Home builders also blame the cumbersome bureaucratic process in the region for slowing the launch of new development projects.

“We can only build what we can have approved,” said Cheryl Shindruk, BILD chair and executive vice-president of Markham-based home builder Geranium Homes.

Ms. Shindruk said complex development requirements, rigid density rules at each municipal level and the backlogged appeal process for land-use decisions have dragged out the time it takes developers to launch projects even when they are keen to proceed.

“It probably takes 10 years to get through the approval process,” she said. “That’s a long time, and it’s probably getting worse.”

Because of a condominium construction boom, the City of Toronto met its housing growth targets over the past 12 years, the BILD review shows. But the suburban 905 regions outside of the City of Toronto had significant shortfalls compared to local targets.

Durham Region, which stretches east of Toronto and includes cities such as Pickering and Oshawa, for example, had a shortfall of almost 35,000 new detached and semi-detached houses compared to the Growth Plan targets between 2006 and 2018, as well as a shortfall of 6,000 townhouses and 3,000 condominium units.

Mr. Diamond said one factor curtailing construction in the 905 region was the level of development charges in many municipalities outside Toronto, which can equal 25 per cent of the average purchase price of a home. Charges for condominium projects were especially higher in municipalities surrounding Toronto than in the city itself over the past decade, he said, although Toronto has been boosting its fees recently.

“The charges both at the local level and the regional level are so high that there’s a real disincentive toward being able to produce high-density housing outside the City of Toronto.” 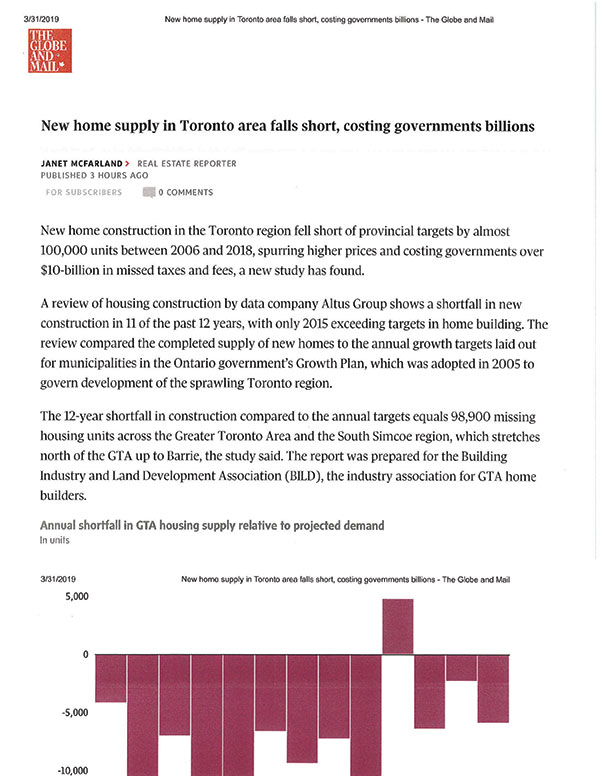