In a cyclical economic sector such as real estate, it is important to gauge your personal homebuying decisions with relativity and realism in mind. Whatever qualifies as your dream home, be it a modest condo, a five-bedroom mansion or something in between, avoid allowing the current chatter about mortgage rules and rates to keep you from realizing that dream.

Remember that the new rules on obtaining mortgages will affect each homebuyer differently. In addition, depending upon which institution you approach for financing, there may be a variety of outcomes. My advice is to visit a few lending institutions prior to making your purchase decision – or before you start shopping, ideally – so you know what you can afford. Should you not qualify for the amount you were hoping for, at a minimum, you might have to expand your geographic search to more affordable areas, consider an alternate home style, or save more toward a down payment.

Keep in mind, too, that in real estate, everything is relative. Looking at Canadian mortgage rates over the past four decades, our rates have remained amazingly low in comparison. Posted five-year mortgage rates peaked to double digits in the 1980s (when they reached over 20 per cent at one point) and the early 1990s. At that time, economic experts believed that we would never experience single-digit rates again.

Looking at the past few years, things have remained relatively stable since 2010, with bank rates fluctuating between 0.75 percent and 1.25 percent from then to early 2018, and prime rates from 2.25 to 3.45 per cent during that time period. The bank rate right now is 1.5 percent, bringing a relatively small increment of the most recent five-year posted fixed mortgage rates from 4.99 to 5.14 percent. Even with this moderate rate rise and

potential increases in the near future, we are still hovering at the low end of historic rates compared to those of the 1970s through the early 2000s.

Yes, there are more stringent rules now to qualify for a mortgage, but keep in mind that Canada’s conservative financial practices kept us from reaching the devastating economic real estate lows the U.S. experienced years ago. These tightened rules are designed to ensure that buyers are, in fact, equipped to handle mortgage payments over time rather than getting in over their heads.

Rates and rules may change, but one thing that remains the same over the decades is that a well-researched homebuying decision is far more likely to result in happy homeowners than a rushed process. Be sure to consider all of the parameters and contemplate your options

thoroughly. You owe it to yourself to make the very best decision possible.

During the past few decades, real estate has proven to be a worthwhile decision for those who ride out the highs and lows of the market. Now remains an excellent time to buy new homes in Ontario.

Stephanie Lane is sales and marketing manager for Geranium.
Celebrating 40 years in business, Geranium has created master-planned communities including more than 8,000 homes in Ontario.
Geranium.com 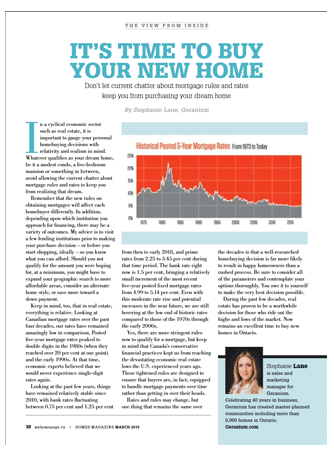