Many builders are running programs to promote work in the trades

Prices of new homes today are affected by numerous factors, including the availability of skilled construction tradespeople. When there are fewer crews available to work on job sites, the total time required to complete the new homes may be extended.

In the GTA, we are experiencing a shortage of skilled workers – bricklayers and framers, to name just two. The good news is that the construction industry is working with unions and colleges through associations and affiliations to remedy the situation. Topping the list are efforts to educate and interest high school students, and to attract women, Indigenous peoples and new Canadians through specific initiatives.

“We are just starting a one-year labour market information study and video series that will promote trades, determine recruitment and retention best practices, as well as highlight the high job satisfaction of many tradespeople in the residential sector,” says Andrew Pariser, vice president of RESCON

Louie Morizio is vice president, housing for Geranium and a director of RESCON.

Since 1977, Geranium has built more than 8,000 homes in fine neighbourhoods and communities throughout Ontario.
Geranium.com

Habitat for Humanity build in Stouffville.

(Residential Construction Council of Ontario). “We will profile 25 different trades through the eyes of one man and one woman in each. The videos will help the viewer understand the components of each trade and demonstrate the tremendous opportunities available.”

Amina Dibe, project and policy analyst at RESCON, is implementing projects that promote recruitment and retention in the residential construction industry.

“By providing resources for school boards outlining what a job in construction entails and showing examples, we create broader awareness,” she says. “Most people have never heard of jobs such as a concrete finisher and drain-layout specialist.”

Another RESCON project includes a partnership with the construction management program at George Brown College. “Each year, we enroll 12 to 15 graduates for two semesters — one in the classroom and one placement in the field,” Dibe says. “On completion, the students are hired into positions such as junior project manager, junior estimator or site clerk.”

In addition, through Humber College’s Carpentry and Renovations Technician program, RESCON is implementing a pilot that will place 15 graduates into jobs in one of six residential trades including highrise and lowrise forming, concrete and drain, and tile. Starting in September, the students will have four month contracts, with the hope that they will be kept on full time.

“We’d like to expand the program to other colleges and engage a higher number of graduates not traditionally seen in the construction trades,” Dibe notes.

By virtue of her own career, Dibe is an inspiration. Her presentations during the George Brown program have resulted in a spike in female participants. “Women are often detail oriented with exceptional fine motor skills,” Pariser adds. “They often outperform men in the finishing trades.”

Many builders are pitching in by running programs to promote work in the trades as well. In addition, the Ontario Youth Apprenticeship Program (OYAP) enables high school students to earn cooperative education credits through work placement in apprenticeable trades. Following graduation, they can become registered apprentices.

At Geranium, we are proud to be part of the construction industry, which is a major economic driver in Ontario. We support the efforts among government and the private sector to encourage more people of all ages and backgrounds to consider the building trades as a rewarding career choice.

Louie Morizio is vice president, housing for Geranium and a director of RESCON.

Since 1977, Geranium has built more than 8,000 homes in fine neighbourhoods and communities throughout Ontario.
Geranium.com 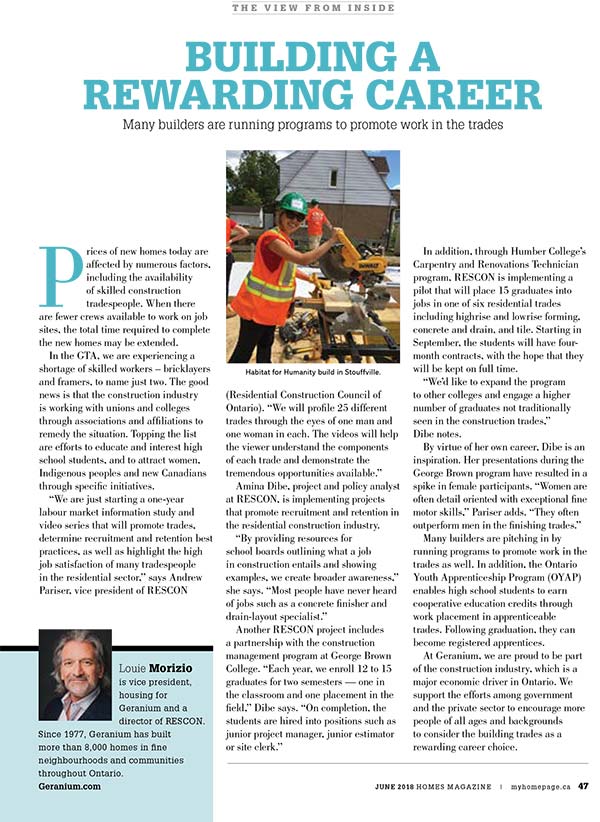