THE FALLOUT FROM A DOUBLE WHAMMY

The year 2017 was an eventful one for new home sales in the GTA. The first two quarters represented the height of the market with regard to prices for both new and resale homes. New homebuyers went into their purchases with expectations that between the time they bought and when their homes were move-in ready, the value of their current home would have appreciated anywhere from 5 to 10 percent, depending on location.

Then the Ontario government introduced the Fair Housing Plan, intended to, among other goals, curtail overheated markets and make homes more affordable. The plan included the implementation

Tony Hunt is CFO of Geranium. For more than 40 years, Geranium has been

creating many superb master-planned communities and built more than 8,000 homes in Ontario.
Geranium.com

of a 15 per cent Non-Resident Speculation Tax on properties in the province by foreign corporations or individuals who are not citizens or permanent residents of Canada. Since foreign buyers account for less than 10 per cent of these purchases in the GTA, the impact was negligible, but it did have a negative effect on consumer confidence.

The double part of the whammy I mention in the title of this column refers to the stricter mortgage rules Canada’s federal banking regulator announced in October, which took effect on January 1. The new rules, which apply to new mortgages as well as mortgage renewals if borrowers switch lenders, extend the requirement for a mortgage stress test to all homebuyers including those with larger down payments.

Federally regulated financial institutions (Tier 1 banks) must qualify applicants by using a minimum rate equal to the Bank of Canada’s five- year benchmark rate (5.14 per cent on April 4) or their contractual rate plus 2 percentage points. In December, a Bank of Canada analysis suggested that approximately 10 percent of

Canadians who obtained mortgages between mid 2016 and mid 2017 would not qualify under the new rules. The net effect means that for many Canadians, the amount they will be able to borrow in a mortgage will, given their income and a certain down payment, be significantly reduced.

These two policies combined have resulted in buyers sitting on the sidelines, some decline in resale home prices (the picture is different in condominiums) depending on where the property is located, which in turn led to a swing in the resale market to a more stable balance between sellers and buyers.

What is frustrating to many industry participants is the lack of consideration given in these policies to those who purchased homes in the first half of 2017 and are now ready to move into the new home.

Their incomes are likely the same, or possibly increased, and their down payment is still with the builder. Yet what they expected to obtain in a mortgage amount could be vastly lower than they were pre-approved for 12 months ago.

Tony Hunt is CFO of Geranium. For more than 40 years, Geranium has been

creating many superb master-planned communities and built more than 8,000 homes in Ontario.
Geranium.com 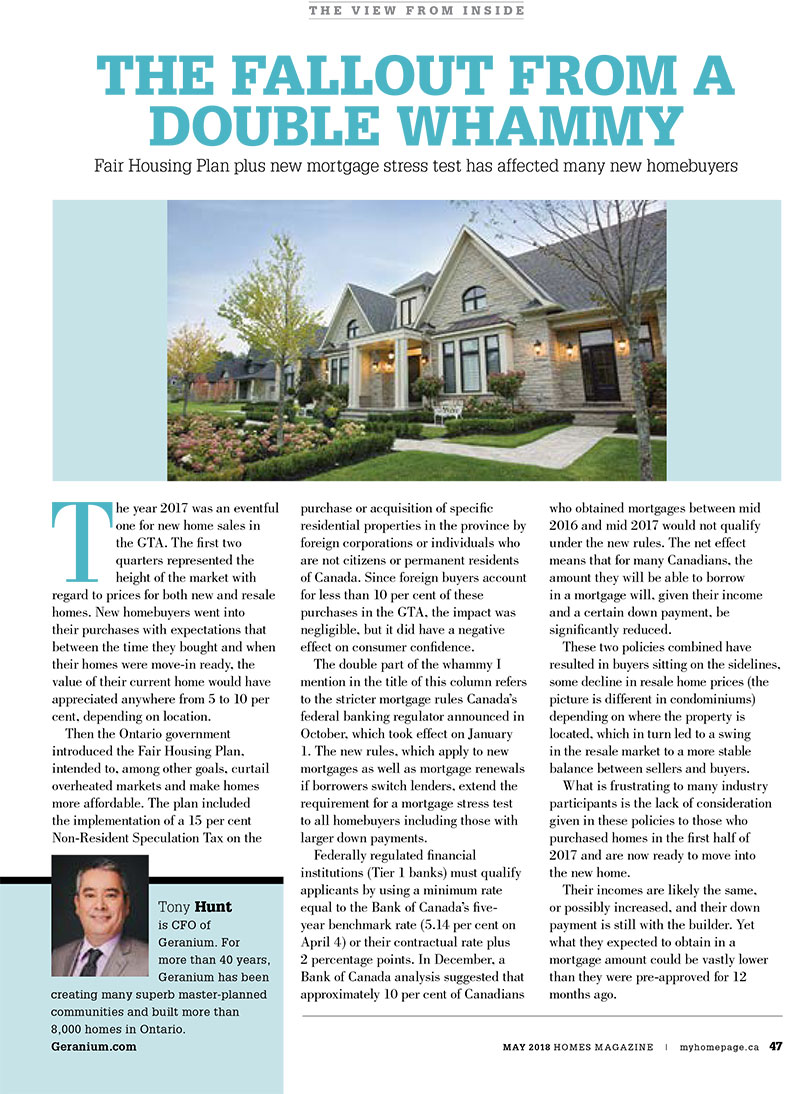